Lily stared at the man, not answering. Just thinking. Thinking that Santa would never expect her to help a hunter of reindeer. Yet, here the man was, and though, technically, he hadn’t come to her, he was the only person she’d seen since arriving at the cabin. And with the snow that was already on the ground, and more likely to come, she couldn’t see anyone else happening upon the cabin unless they drove a sleigh or operated one of those snow machines.

Still. It was too impossible to believe, and even thinking it had her feeling light-headed. She needed fresh air. Lots of fresh air. Putting a hand to her forehead, she made her way to the door. When she opened it and saw the sky was full of tiny snowflakes, she let out a gasp and grasped the doorframe. 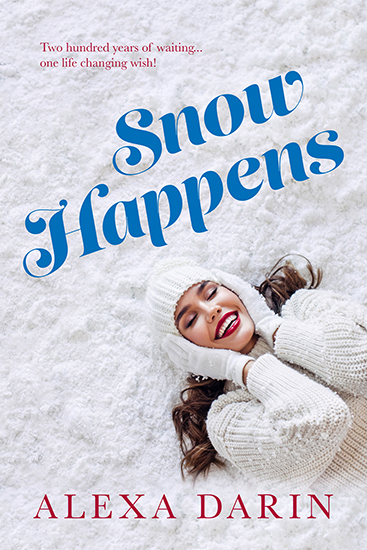 “No. I’m fine,” Lily said. But she wasn’t fine. She needed a dose of sugar. She hurried to the kitchen, to where the pies and platters of cookies were lined up along the back of the counter. “I think I just need something to eat. A piece of pie,” she said. “Are you sure you won’t join me? I have plenty, and I don’t mind sharing.”

Jake laughed lightly. “Glad to hear it, but really, I’m more a meat and potatoes kind of guy. So, if it’s no trouble, I could use something warm to fill my belly. I had a thermos of coffee and a couple sandwiches in my saddlebags, but since my horse has run off, well, they won’t be doing me much good now.”

“I don’t cook meat,” Lily said, her nose wrinkling, “and I haven’t any potatoes at the moment. But if it’s something warm you need, I’d be happy to make a pot of hot chocolate. A good dose of chocolate cures just about any ailment, and I wouldn’t mind having a cup myself. I also have a nice fruitcake that might still be warm. I know most people don’t care for fruitcake, but mine is different. It’s edible and healthy, full of nutrition. Would you like to try a piece?” She held it up for him to see.

Jake’s face bore a scowl. “No. No fruitcake for me.”

“Are you sure? You said you were hungry.”

“Not for fruitcake,” Jake said. “Hot chocolate will be fine.”

Lily’s shoulders slumped. Fruitcake was so misunderstood. She placed the fruitcake back on the counter, and then turned to the cupboard and gathered ingredients for making hot chocolate. She’d prepared it from scratch so many times, it was easy. The secret to great hot chocolate was in the stirring, and stirring didn’t take long at all. Just a few minutes.

“I hope you like it,” she said when she handed Jake a mug full to the brim.

Lily looked at him over the rim of her mug, still not believing he could be her assignment. Though if he was, it meant their time together had just begun. It also meant she would have to set aside her distaste for his being a hunter and go about helping him just as she would any other subject. The hard part would be keeping him there at the cabin. She looked to the window, where the tiny snowflakes had turned into flakes the size of quarters. “How’s your ankle?” she asked, determined now to see her assignment through to a successful completion.

“Perhaps you should spend the night. It’ll be dark in a couple of hours, and if you wait for morning, you’ll have better light to see your way through the forest. Plus, your ankle will have more time to recover.”

Jake looked down at his foot, tried to flex it and winced. “I hate to say it, but I think you’re right. I just hope it doesn’t snow all night. It’d be a long walk home on a sore foot unless I were to get lucky and find my horse.”

“Maybe you will,” Lily said, but not wanting it to be so.

Lily set her empty mug down and put a hand to her mouth, yawning. “Goodness, I got up so early, I feel like I’m in need of a nap. If you don’t mind me leaving you alone, I’d like to go to my room for a while.” She was already on her way, needing the solitude so she could think.

“Don’t worry about me,” Jake said. “I have my dog to keep me company.”

Once behind the closed bedroom door, Lily commenced pacing. Pacing went along with thinking. And her thinking was that snow might be the only thing that would keep the hunter there for more than just one night.

Lots and lots of snow.