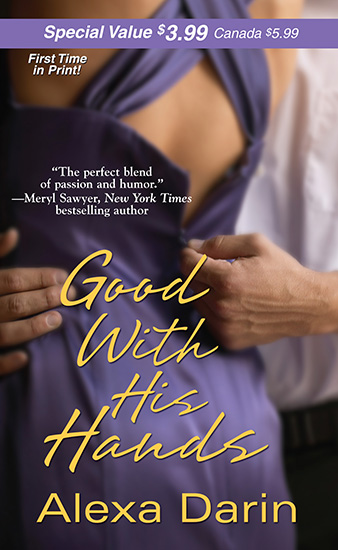 Good With His Hands

Wanted: Man who uses his mind instead of his hands… Pepper Bartlett has always been a woman who knows exactly what she wants—except when it comes to men. With a body to die for and classic girl-next-door good looks, she’s never had any trouble finding a man. But finding one who doesn’t cheat, lie, or run in the other direction at the thought of commitment is another story. Determined to swear off the usual—hot men wearing jeans and a hard-hat—Pepper places an ad with only one requirement: No Blue Collar Guys need apply.

Jake Hunter is smart, sensitive, and a hotter-than-hell architect. He’s designed homes for the rich and famous for enough years to know it’s not his bag. He’d like to find a woman who’s down-to-earth and settled enough that he can trust she won’t go running off with the first rich man who looks her way.

Will Pepper and Jake find enough common ground to build upon? Or will Jake’s secret keep them from both finding what they’re looking for?